Yesterday, I went to see Stephanie Messenger give a talk on “Your Vaccination Options” plus “Sudden Infant Death Syndrome”.

Approximately 35 people showed up; plus a couple of babies, toddlers and young kids. A couple ladies were clearly pregnant.

Unless otherwise noted, these are the words of Stephanie Messenger (SM); however I may have paraphrased in places. Here are my notes from the event:

SM starting by making it very clear that she has no qualifications to speak on vaccination or SIDS; however she has been researching the subjects for many years. She also made a point of saying that if you have a problem with this you could leave now and get a full refund.

SIDS has no known cause. There are risk factors, including smoking (no brainer). Babies should be sleeping on their backs.

A book was then promoted: “Cot Death Coverup” from New Zealand, based on the work of Barry Richardson of the UK. The book discusses Toxic Gas Theory. The organisation “SIDS and Kids” are not interested in this theory; they claim it is disproven. The organisation has been hijacked by scientists.

A poster was then displayed titled “SID FACTS” with a number of claims:

Next we were shown a graph “Cot Death Rate for 1st and later babies of solo parents (Britain 2005). This basically showed that later children and children of older parents were at great risk of cot death. 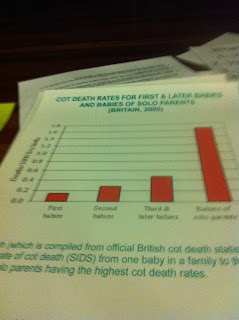 Don’t use normal plastic to cover your mattress

Comment from the audience: Bubs N Grubs sell organic latex mattresses with coconut husks. This resulted in much discussion. SM said “some plant matter has phosphorus”


Most babies sleep on their stomachs

Babies get fever from vaccinations

The timing of vaccinations co-incides with SIDS

SM stated “I no longer believe vaccines cause SIDS”

Vaccines poisons babies and they take a longer time to die from it; it is not overnight.

We were then taken thru the definitions of “Beliefs” and “Knowledge”

The whooping cough epidemic along the eastern seaboard (Cairns to Melbourne) is mostly in the fully vaccinated.

Attributed to vaccines poster (lists each vaccine with relevant side effects, the text of which was too small to read)

Packaging inserts:
The gist of this was to relay the idea that although information about vaccine side effects are supplied with the vaccine, they written and presented in such a way as to make it as difficult as possible to read and understand.

It is compulsory to vaccinate in the US

There was a nurse in the audience who constantly interrupted, I have only noted a few of her comments

Nurse “patients are never told the risks before vaccination”

SM then told us that although babies get sick and even die as a direct result of vaccination, it is not recorded on the chart or death certificate. For example, the vaccine might cause encephalitis leading the hospitalisation or death. The hospital chart or death certificate with say encephalitis as cause of illness or death; not the vaccine. This means that we bury our heads in the sand on vaccine reactions.

Raised antibody levels not scientifically proven to raise immunity EVER

Small pox mass vaccination correlated with a spike in disease

We were shown a graph that measles was already on the decline since 1870 and by the time the vaccine was introduced in 1970 it was already nearly gone.


Why do people have faith in the medical industry?

Fear is used to promote vaccination in hospitals; this is a great reason for home births.

Many people die in hospital for reasons other that what they went in for.

Doctors have gone on strike twice in the world

Doctors have the shortest life expectancies; why go to them for health advice?

Doctors treat the symptoms of disease, not the cause.

SM recommends you go to a natural therapist before you get sick.

Lady in the audience comments “vaccination in schools without consent is coming soon” *audience gasps* The same lady goes on to say that the Australian constitution has been changed again to allow this.

(For the record, the Australian constitution has not been amended since 1977)

Vaccination is NOT compulsory, you do have choices.

So What Can You Do?
1. Follow the government recommended vaccine schedule
2. Select from the government list
3. Homeopathic vaccination – Isaac Goldens produces a kit, Rachael Gleeson is a Brisbane homeopath, half of homeopaths do not believe in homeopathic vaccination as it goes against like cures like.
4. Create a naturally healthy lifestyle.
5. Do nothing – western lifestyle leads to reduced mortality.

Then SM did a bit of showman ship, she held up an object covered with a cloth. With a big gasp from the audience, she revealed a life size baby doll stuck like a pin cushion with needles.

A doctor in the audience then spoke up. She was a pediatrician, but is now a GP. She has been in court for five years because she signs so many conscientious objector forms.

Another audience member then shouted out that injection of RFID chips is coming soon.

The nurse then commented that she refuses to vaccinate kids.

SM then tells us the flu vaccine leads to an increase in Alzheimer’s.

There is no autism in the unvaccinated.

Another audience member “treat the side effects with homeopathy”

I now quote SM “It is good for babies to catch diseases at the right time designed by nature”.

Most diseases appear in the fully vaccinated.

Question from the audience: A friend is travelling overseas and won’t be allowed back in Australia without vaccination.  SM answers: only one vaccine is a requirement, that is for yellow fever when you travel to Africa or the Amazon. She suggests you go via another country before coming home to get around quarantine.

The nurse then told us she has a child and is having trouble finding daycare that does not have policy of compulsory vaccination. We were then told they must allow for conscientious objectors.

SM informed us that if required she would supply the name and phone number of a local doctor as required to get your form signed.

From the audience “From July there will be no payments without vaccination”
1997 immunisation act must allow for conscientious objectors.

SM told us that you will always be exempt if you join a religion that won’t allow vaccination. She said to visit www.churchofcl.com, download a form and join.  SM appeared extremely smug as she told us this, so I am guessing she has her finger in that pie. Having a look at the website, it appears the church only exists on the internet.

When her kids were in school, she wrote on the forms “toxic garbage keep it away from my children or I will sue you”.

SM told us a story of a new father who got his conscientious objector forms signed as soon as his baby was born. At the hospital, he insisted that there was to be no Vit K injection. The doctors insisted and the matter went to court. SM advised him to collect the baby and leave the hospital before they could inject. The story carried on for a while, with the father going back to court, SM advising him to move interstate and “go off the grid” and in the end the baby got all the injections.

Our nurse then spoke up again, “tell your doctor, this is NOT for debate, I will not allow vaccination of my child”. SM then suggested to tell the doctor that bullying will not be tolerated.

Homebirths and homeschool give you more control.

Homebirth deaths make the news, hospital deaths are not newsworthy.

Hospitals use tap water with fluoride to make baby formulae

People who vaccinate are loonies.

Get the message to pregnant women. Buy some of our postcards and hand them to pregnant women you see, just say “you might need this information” and walk away. (I thought this sounded a bit creepy).

Someone called out from the back; I didn’t get all the words, but it was something like “Bill Gates….population control…. GMO….” You get the picture.

In the US it is now illegal to grow your own vegetables.

SM now plugged her organisation, for only $25 year you can support my work.

Next we pushed some products:
Negative Ions kill bacteria in 60 seconds

For some reason, we then had some talk about the new airport scanners. They are x-rays that cause cancer and sterilisation (population control was mentioned again).

Then SM promoted a book:
“Melanies Marvelous Measles” for $20
The purpose of this book is to educate children. SM said that she even told her kids to run away from school if they have to to avoid vaccination.

SM told us the Australian Skeptics “those nasty people” don’t like her book; this brought muttering from the crowd. An audience member right behind me said something along the lines of “its run by doctors”.

My original plan was that after the seminar was finished, I was going to hand out the Five Vaccination Myths fliers like I had done at Woodford. At Woodford, these fliers were well received and I met some really lovely people. Even before SM said this about the skeptics, I was re-evaluating my plans. After that comment, I decided to stay incognito. It is a very uncomfortable feeling sitting in a crowd of people who are hostile simply because you do not share their delusions and paranoia.

Next we had a promo for SM’s new book “Sarah Visits a Naturopath” which is out next week.

For some reason, we then heard about GM foods and were told to read the labels and never eat anything with canola.

The doctor in the audience gave another rambling speech that started with GM food and ended with “go with God”.

Then we were told about a poultice to draw out the toxins from vaccination. There are two versions, one made from potato and another from charcoal.

The nurse spoke up again to tell us that Florence Nightingale was against vaccination. Personally, I am not sure how the opinion of a nurse who died 100 years is relevant to modern medicine. I guess this would be appeal to authority and perhaps appeal to antiquity.

SM wound up by telling us that she has monthly support groups in Cleveland, Gold Coast and Toowoomba and another is coming soon to Redcliffe.

Once the seminar was over, two tables were open for business selling postcards, books, negative ion panty liners and toothbrushes.

To summarise my experience, this seminar seams to be a load of scare mongering, leading up to a serious sales pitch.

I guestimate she took in around $600 in ticket sales. That would cover her expenses of hiring the hall and preparation of materials (which would be used over a number of events) with plenty leftover to make a nice paypacket for an afternoons efforts.

At the end of the sermon seminar we had a number of sales pitches for her books, panty liners, tooth brushes and other items for sale at the venue.  I can tell you first hand, the tables were packed with customers.  We also had a big pitch to sign up to help her “work” for $25 year. In return, you get a newsletter, which is littered with adds for her own products and has a an order form on the back for products ranging from $15 to $45.

This work is licensed under a Creative Commons Attribution 3.0 Unported License.
at 7:39 PM

Say No To Chaplains